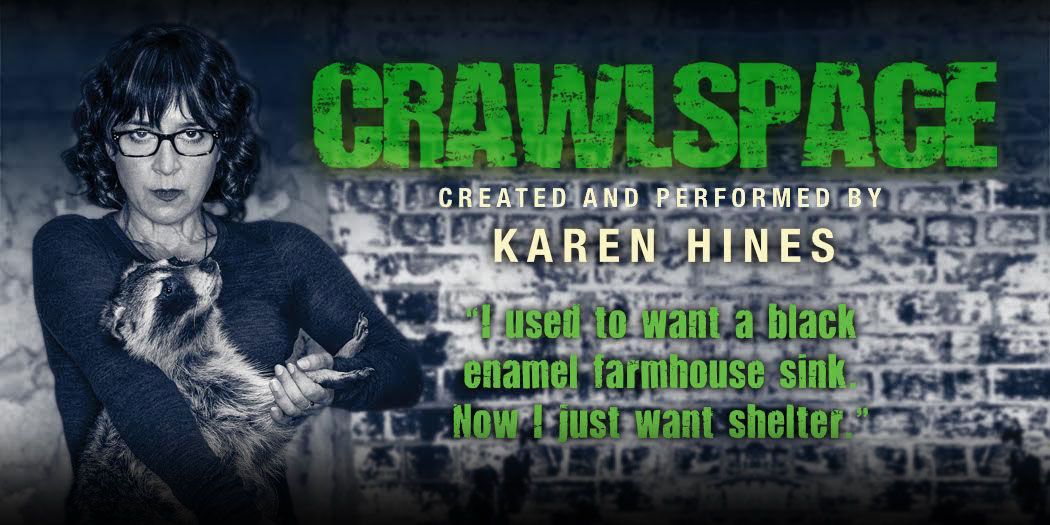 Created and performed by Karen Hines

Award-winning writer and performer Karen Hines explores the darker side of real estate in CRAWLSPACE, a comic, Kafka-esque monologue that snakes through the brutal battleground of real estate, decorative twig orbs and the state of the human soul.

CRAWLSPACE is inspired by Hines’ true story of buying a fully detached 'condo alternative' in a hip downtown neighbourhood in a heated market... and how it all went horribly, nightmarishly wrong. The story became a National Magazine Award-nominated feature called My Little House of Horrors (Swerve Magazine). It was then adapted as a stage play and readings were performed for ‘boutique’ audiences in an Edmonton basement, a Northern Ontario dining room, and a tiny Toronto kitchen. CRAWLSPACE premiered publicly at Videofag, a cultural hub in a storefront space in Toronto’s Kensington Market.

Now being adapted as a feature film, CRAWLSPACE is a darkly comedic tale that moves past ‘cautionary’ as it unearths the darker side

Crawlspace is a comic, Kafka-esque monologue about the darker side of home ownership that moves past “cautionary” as it snakes through the brutal battleground of real estate, decorative twig orbs and the state of the human soul.

“A wonderful piece of theatre created and delivered by

a master of understatement

The Globe and Mail

“A blistering commentary on our consumer culture. Pitch-black funny.”

"The captivating Hines spins a good yarn… and Hines’s cautionary tale is, of course, more relevant than ever. Her giant middle finger to the system is potent therapy for everyone feeling left behind or shut out from the dream (or nightmare?) of home ownership."

"Hines’s performance is wonderful, but the real magic here is her writing. Crawlspace is full of incredible details and observations … darkly comedic and emotionally daring. Crawlspace is resistance theatre and it’s nothing short of inspiring."

"Revealing her story like a gothic thriller with a shadowy real estate agent, a duplicitous seller … she pushes its impact beyond shock value through sheer ability and mastery of her craft."

"Hines’s story is about what happens when we let greed undermine decency—her character accuses herself of being credulous, but it’s much clearer that she was massively deceived… Fear not. Hines finds hilarity in darkness as surely as a pig finds truffles in the mud."

"Crafty, comical and self mocking, Karen Hines’s one-woman show Crawlspace
will draw you in."

"A blistering commentary on our consumer culture. Pitch-black funny."

"Hines at her most horrifyingly hilarious."